Against the Grain Album 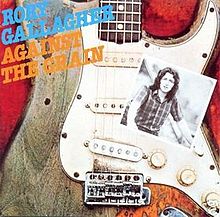 AGAINST THE GRAIN released on 1st October 1975

Track 1, Let Me In. Does this concern someone in particular I wonder? Only calls her baby once in the song. Its fast paced, zooms along like a high speed train, Rory’s fingers flying on the guitar, Gerry solid and dependable on bass, Lou (R.I.P) on piano and Rod (R.I.P) on drums. Rory had an ability to bend the strings like no-one else I have heard, on this track they wail like a banshee, plays havoc with my brain cells, just totally cosmic and off the planet. I really really love this song, for me personally it’s lose my shoes and dance like the world will end at the end of the song.

Track 2 Cross Me Off Your List. A real person, gets mentioned as “baby” several times. Seems she is blowing hot and cold – You can rub me out and cross me off your list, try to clean the slate just like I don’t exist – But I keep on holding baby and you keep on holding out. Rory isn’t mad with her, like in other songs where its evident that the she in question there has really crossed the line, this is more playful lyrically, You can try to get rid of me but I’ll still be here, I’m not that easy to get rid of. It’s an upbeat tempo, lots of opportunities for each member of the band to “shine” for a bit, but Rory is the sun. It’s a kind of tongue in cheek song. I like it very very much.

Track 3, Ain’t Too Good. Slow, seductive and bluesy, just gets right under my skin. Sad and melancholic lyrics but not about anyone specific. No terms of endearment in the lyrics – baby, darlin’ I mean. The lyrics speak of a love that burned bright but its dying now, might be able to come back to life – it ain’t too late to change your mind but better be quick, ‘Cause I got plans, from now on. It’s a beautiful song, beautifully written, perfect melody; I love this even though it’s sad.

Track 4, Souped-Up Ford. The tempo/beat really is like a car driving fast along the road, blowing all the other cars out of the water, I’d be windows down, sounds up loud and just having a blast. It’s a really fun song, very upbeat and the lyrics match the beat of the song. Its great, I love it very much. Rory and the boys having a great time.

Track 5, Bought and Sold. This became one of Rory’s standards at live shows, I’ve read that it kind of refers to his Taste days, it’s fast paced on this album, live it would have been cosmic, Rory was such a great showman, giving 110% every performance, it’s an amazing song, really amazing

Track 6, I Take What I Want, a Hayes, Porter, Hodges song, had been done by Sam and Dave but Rory worked his magic on this song and it became something else, it’s fast paced like a car racing, they sound as if they are having a ball, it’s a real fun song, a dance till you drop song, one of my favourite dance tracks, Rory’s version has a lot more soul!

Track 7, Lost At Sea. It’s only a short song but it says such a lot. He was lost at sea but was saved, being battered about but someone grabbed him and saved him. I’ve read that some of Rory’s songs/lyrics related to Taste, and the fallout from Taste is still going on today, it must have been a source of dismay and hurt to Rory as it continued from the disbanding of Taste right up to his death. “Friends of no-one – Who knows where but I was Spared”. Reading between the lines there is a lot of pain there but he carries on sailing on his own sea. It has some beautiful slide work, just like waves lapping the shore.

Track 8, All Round Man. According to the sleeve notes this was written by Bo Carter who was a member of the Mississippi Sheiks, a band Rory admired. Its gutsy, gritty and bluesy, Rory as always works his Rory magic on it and nails it to the floor. Lou Martin (R.I.P) produces a beautiful solo, Gerry McAvoy as always solid and dependable on bass, like the anchor on a ship keeping it steady, Rod de’Ath (R.I.P) bringing up the rear and minding the back door. They were a tight band, perfectly balanced and working as one unit. To dance to this you have to be up real close and personal with your honey, it’s the only way to dance to this song.

Track 9, Out On The Western Plain, by Huddy Ledbetter, better known as Leadbelly. A favourite of Rory’s, often performed at live gigs, the fans almost demanded it. Rory was a big fan of western films, as always Rory worked his own magic on this song, a twist here, different note there. It’s a lovely song, the lyrics tell of a cowboy who has worked all his life on the Western Plain, made his money, just re-visiting riding into Jesse James and Buffalo Bill – Come a cow-cow yicky, come a cow-cow yicky, yicky yea.

Track 10, At The Bottom. I’ve read that this related to the demise of Taste. This obviously bothered Rory a lot, kind of being stabbed in the back and having to cut loose to survive. He likens himself to a fish on a hook at the bottom, as low down as you can get but he has to rise up again. “Takes a fall to land you on your knees, kick that ball if it lands right at your feet, watch it fly, high above the trees, till it lands in tomorrow”. Pick yourself up, strap your armour on and you are ready to do battle again another day.

Track 11, Cluny Blues. An instrumental, only just over 2 minutes long, it’s a real fun song, Lou (R.I.P) playing a honkey tonk beat on keyboards. Everybody gets a turn to shine even though the song is so short. It sounds as if they were having a lot of fun.

Track 12, My Baby Sure. Another short song, starts with Rory doing voices, Deputy Dawg gets a mention, the first time I heard this I wondered what was going on, that maybe the wrong song had been put on my CD! Then I realised it was Rory. Another fun song with a country and western feel to the tempo. About a girl who is rather footloose and giving him the run-around, She sure knows her way around ‘Cause her daddy owns the whole damn town, and he don’t give a damn for me. It’s really upbeat and again sounds as if the guys were having a whole lot of fun recording this.

Create your own review
Against the Grain Album
Average rating:   0 reviews