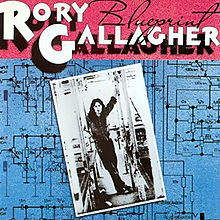 Track 1, Walk On Hot Coals, one of 2 albums Rory recorded and released in 1973 – this is a blaster, it explodes like a nuclear bomb at the start and never let’s up, Walk on hot coals, Sleep on a bed of nails, Walk on thin ice, Skate on razor blades – where did those lines come from? There, speaking for myself, some lines from a variety of songs that slap me in the face and give me hot and cold chills – these lines are in that box – it’s an awesome track – any live version is off any scale for energy, Rory as always giving the listener everything, enjoy the ride, always inventive, always a joy and pleasure to hear.

Track 2 – Daughter of the Everglades. A real contrast to Walk On Hot Coals which hit you like a train, this is a quieter song, it has a dreamy quality, about a girl who leaves her home and the thing that sustains her – the bayou and the river, to go with her man to the city, but she has to go back as the city is killing her, he didn’t quite understand, and when he goes to find her she has drowned, I’m guessing she didn’t want to choose between the man and the bayou so she chose neither, it’s one of Rory’s amazingly sad songs, a beautiful song about lost love, lost opportunities, lost future – an amazing track.

Track 3 – Bankers Blues. This is a Big Bill Broonzy number with the Rory treatment, he was just so good at taking a good song by another artist and making it spectacular, Gerry McAvoy on bass and Rod de’Ath (R.I.P.) quietly bringing up the rear with Lou Martin (R.I.P) on piano and Rory fingerpicking the acoustic guitar – in this case a 12 string – and harmonica, showing just how talented he was and only 25 at the time! Rory had the ability to nail other artists songs without taking away from the original but giving them his own mark and in my humble opinion Rory’s sounded better and still do than the original songs.

Track 4 – Hands Off. You are led into the song by finger clicking, then the drums and guitar at the same time begin and Rory sings, I can imagine him (as I have seen in videos and photos) using the strat like a gun, pointing it like a weapon. Rod de’Ath (R.I.P) on drums provides the perfect pounding backdrop to the song, Lou Martin (R.I.P) on keyboards, non of the instruments overpowers the others, they are balanced perfectly, as always with Rory every other member of the group gets a chance to shine.

I’ve had enough interrogation – now, had someone been doing this? If you get asked too many questions it can seem like interrogation, then letter writing until the ink turns green, trying to ruin my reputation, sell it to a magazine. I think at this point in time there was the start of the “expose’s” in the tabloids and Rory, being such a private man, would have avoided anything like that, but that didn’t stop him from incorporating the subject into a song.

Its a stormin’ song, smokin’ menacing, brilliant. Rory had far more sides to him than people realised, a true genius.

Track 5 – Race the Breeze. Trains, one of Rory’s favourites, along with circus’s, funfairs and westerns. Musically Rory has made this sound like a train running along the tracks – no train whistles as often appear in other songs about trains, I just get the feeling of actually being on the train as its travelling along the tracks. On a moving train you can actually race the breeze, I find it a comforting sound listening to what I call “a proper train” with a funnel and steam and hearing it almost fly along. As always Gerry and Rod (R.I.P) minding the back door by providing a solid sound and on this track, Lou Martin (R.I.P) who normally played keyboards, plays guitar. Makes me want to find a steam train and hop aboard for a spell.

Track 6 – Seventh Son of a Seventh Son. This is the only one of Rory’s songs that has me completely foxed, according to the notes in the CD he asked the promoters what was the next act/show after his Irish Tour and they said they had booked Finbar Nolan, the faith healer. Everything I have read emphases Rory’s interest in spiritual things, telepathy, his antennae were always “on”, he had a sixth sense, so it seems logical for a song about this subject. Its a very “wordy” song, like some of Bob Dylan’s are “wordy”, I’ve listened to this a lot while re-visiting the album and I think I may be foxed because the beat hardly changes for the entire song, usually there is an intro, middle and end, the back beat from the drums and bass vary and in this song, and as far as I am aware, only in this song, its constant for the entire song. I like the song but it really seems “out there”, does not fall into any other category that Rory’s songs would fit in – slow, sad, manic, danceable, fast, blues – it seems to me that this truly is a one off.

Track 7 – Unmilitary Two Step. This is a gorgeous acoustic number, no lyrics, it’s really a fun track, very happy, I like it a lot. Rory had such a lot of talent; I’m in awe of his prowess musically. I honestly don’t think there was a stringed instrument he wouldn’t have been able to play – even an actual sitar had he put his mind to it!

Track 8 – If I Had A Reason, Rory on lap steel guitar and Lou Martin (R.I.P,) on honky tonk piano, it’s a sad song, Rory wrote, in my humble opinion, very poignant sad songs, it’s about love gone away, it could mean the loss of a loved one in the case of a grandparent, someone who figured greatly in life who is now no longer here, I don’t get the impression of a romantic partner who has gone but someone else, the picture curling in it’s frame with a face smiling patiently. I’ve listened to Rory sing this and also Band Of Friends do a version in their CD with Gerry and Ted singing and both versions bring on tears, it’s a very moving and emotional song.

Track 9 – Stompin’ Ground. Its a short song, less than 4 minutes, but OMG, it blasts at you at a hundred miles an hour, there’s a hell of a lot packed into this song, the pace never lets up, it crackles and spits fire – Live Rory could have stretched this to 8 minutes or longer, depended on his mood at the time and being able to read the audience he would have kept them in the palm of his hand for as long as he thought they needed to be there – and the fire would have continued to the end. It’s a really awesome song, kind of bluesy as well, someone has been away for a long while and is going back home for a spell. I love it.

Track 10 – Treat Her Right, bonus track from the remastered Blueprint. A Roy Head number, I played Roy Head’s version and its kind of tinny, very very 1960’s sound. Rory’s version, about a million times better, Rory works the Rory magic on it and although the skeleton is the same, the coating is all Rory. He was such a genius, could take songs by other writers/artists and do such wonders with the sound and it was like a different song. This is only short, again under 4 minutes, but what Rory does with those 4 minutes, with the solid backing of Gerry McAvoy on bass, Rod de’Ath (R.I.P) on drums and Lou Martin (R.I.P) on keyboards it becomes epic.