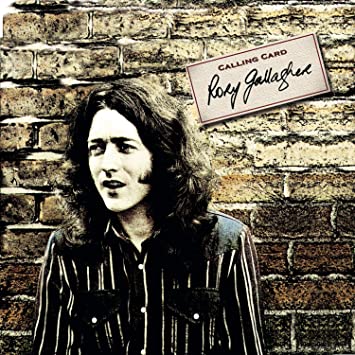 Track 1 – Do You Read Me – I believe this song does relate to a real woman, Rory makes no mention of any romantic relationship – no baby or darlin’ but I am guessing it was someone he was keen on and she didn’t realise – “why am I the only one that’s misunderstood” then “if you won’t take me then I guess the devil must”. Musically and lyrically this is an amazing song, on a studio album it is brilliant, live it would have been cosmic. I’ve heard Band of Friends perform it so I can only use my imagination.

Track 2 – Country Mile – the beat starts to this and never lets up, you have to run alongside to keep up with it, this pounds the road like a runaway train. Again a roundabout reference to life on the road, never staying in one place very long, always on the move, cars, trains, planes, relentless travelling from place to place. It’s a fun track, I’d have my shoes off to dance to this.

Track 3 – Moonchild – Its about a mythical girl, a child of the moon, of the night, Rory wants to make her smile and paint the sky blue forever for her. It’s a dreamy kind of song, Rory, Gerry, Lou (R.I.P) and Rod (R.I.P) working as a tight unit to keep the tempo flowing like a stream over pebbles. It’s a really beautiful song.

Track 4 – Calling Card – a standard live track, loved by everyone. “the rain ain’t fussy about where it lands, it’ll find you hiding wherever you stand, it’s gonna rain brother, and it’s gonna rain hard, when the blues come calling with his calling card”. Those blues again, they will seek you out, a little bit or a lot, but when the blues come calling you will be found. A nice driving bass from Gerry, perfectly balanced with Rod (R.I.P) on drums and Lou (R.I.P) on piano and Rory on guitar. A beautiful twist on the blues, Rory taking the listener on a different journey.

Track 5 – I’ll Admit You’re Gone – those blues again taking hold, he can’t believe she has gone, and it will take a while for him to get used to her not being there, to admit to himself that she has gone and isn’t coming back. He can only see blue days in the future, they have taken quite a toll but he wants to see the dawn of the day when he stops hurting. The lyrics are so sad, so painful, Rory again writing from his heart and soul.

Track 6 – Secret Agent – spies, intrigue, cloak and dagger – his baby has hired a secret agent to keep an eye on him, she is jealous and wants to know his every move but he plans to run rings round this secret agent – you’ve crossed me once, don’t cross me twice – he won’t stand for being spied on especially by someone packing a .44!

Track 7 – Jack Knife Beat – This is a bit of a sneaky song, by that I mean it comes along and you don’t realise its there till “the rhythm gets inside your shoes” or in my case my feet as the shoes would be off. “Jack-knife beat, killer of a back beat, sounds like an ice truck rolling down a back street” – where the heck did that line come from? It comes along and just smacks you right between the eyes. The beat is like a jack-knife, its gutsy and seductive, it has a gorgeous beat between the bass and drums, not rolling like a train but it has everything I would need to do it justice on the dance floor.

Track 8 – Edged In Blue – Oh, what can I say? The intro is just off the scale of gorgeous, its bliss, pure bliss. I really wonder how this would have turned out had Rory kept the same lines for the rest of the song, maybe an instrumental or kept the tempo the same for the lyrics – that’s something we may never know. It’s such a beautiful song “I’ve cried enough tears to fill up an ocean, surely you see that my heart’s been broken” “All my days are edged in blue” “Here am I, where are you, help me please, pull me through”. The lyrics are so sad, Rory wrote from his heart and soul and some of his lyrics are a bit blue, some a lot blue and some are really heartbreakingly sad, this song falls into the last category.

Track 9 – Barley & Grape Rag – A fun song, “My baby’s done me wrong you must have guessed it” so he is off to town to drown his sorrows till dawn, might get arrested, might not, he will worry about that tomorrow and own up to any wrongdoings. I did read that on one of the recordings of this with The Dubliners, they were all mixing the barley and grape and having a wonderful time and one or two of them were much the worse for wear and at least one of the Dubliners was missing from their show the next night because of it!

Track 10 – Where Was I Going To? – I wasn’t able to find the lyrics to this on the interweb, so I listened to the song slowly and wrote them down, then listened again and made a couple of changes here and there. I believe this involves a real person, the lyrics say that to me, “how could I leave without you, how could I go anywhere without you, never thinking what he could lose by going without her”. It’s a song of loss, what has gone and cannot be again, another sad song, only someone who has felt real heartbreak can write about it. Its beautiful and sad at the same time.