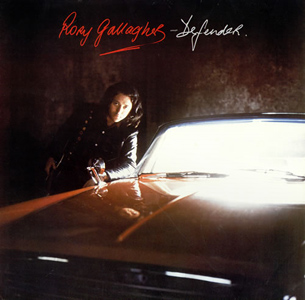 Track 1 – Kickback City – The lyrics are inspired, a not nice place to live, fear eating your soul, but you learn to play your part to survive but you are still lost before you start. The Coral electric Sitar was used for a few phrases in this, gave it the extra kick Rory was looking for, this song also paves the way into Loanshark Blues, I think that was probably Rory’s intention.

Track 2 – Loanshark Blues – The beat for this is absolutely amazing. As I love to dance I would dearly love to dance barefoot to this one. I have read that this was Rory’s favourite track on this album; he had to keep it controlled so it didn’t run away. Again the lyrics are about Loanshark’s, which, unless I am wrong, I don’t think anyone else has written a song like this about people who have to use Loanshark’s because they are absolutely desperate. He managed to keep the lyrics precise and stopped short of being a “moany” song, the kind of “poor me” thing. I love this song very much.

Track 3 – Continental Op (to Dashiell Hammett) – Rory was a huge fan of Dashiell Hammett books and the Continental Op was a favourite, it was only natural for him to write a song dedicated to one of his favourite authors of crime novels. It has the kind of beat (again my dancing feet) that lets you think you have got away but then it pulls you back, very very clever but then Rory was so inventive, always looking for ways to surprise and keep the listener (and dancer) on their toes.

Track 4 – I Ain’t No Saint – Real gutsy seductive sexy blues beat, I, and probably a lot of other people, wish Rory had done a complete blues album, it was probably in his mind to one, I have read he wanted to do an acoustic album but unfortunately this never came to be. I am immensely fond of this track, as I adore gutsy blues and this track also has Rory on Saxophone but he didn’t credit himself with it, he double tracked it.

Track 5 – Failsafe Day – the drums are the dominant instrument on this song, does this refer to the unrest in the world, it seems that way to me, “What I see just takes the heart from me” “They’re gonna fade us all away”, Rory never just wrote words and put music to them, every word meant something personal to him or every line, I feel he was under-rated as a lyricist, he was very prolific and who knows how many songs never made it to the recorded or played at gigs stage?

Track 6 – Road To Hell – I have read the lyrics “so many times I’ve tripped and fell, No chances left” “Too late to save me” “Broken Wishes and broken dreams, close to the edge I cut it lean, no regrets” “The sky’s coming down on me/The wall’s coming down on me/The flame’s getting higher on me/The Ground’s opening up on me/The devil’s go the jump on me/The pain’s coming down on me” I feel that Rory was not in a good place when he wrote this, this again is from the heart and soul, he wrote what he felt, good, bad, happy or sad. I don’t want to say any more on this song.

Track 7 – Doing Time – Rory plays a killer slide on this track, great drumming from Brendan O’Neil and Gerry McAvoy solid and dependable as always providing the base for everyone to hang onto. The lyrics are kind of reminiscent of the gangster/prison movies of the 1940’s and 1950’s, the he is in prison, his girl is on the outside with his friend, he drove the car and took the fall for them and they are just ready to stab him in the back. He has had enough of breaking rocks while his girl and his friend are having a high old time on the outside, so he is breaking out today – “Revenge is sweet so they say, watch your step I’m breaking out today”. It’s an excellent song, I love this one a lot.

Track 8 – Smear Campaign. During the mid 1980’s we had a lot of smear campaigns on various politicians, lots of “kiss and tell” stuff being printed in the tabloids and then it made the TV as well. I don’t think it was about anyone in particular but at the time all the politicians and wannabe politicians were having to watch their backs and not let the skeletons fall out of their closets. The strat was doubled up for this song, its inspired lyrically.

Track 9 – Don’t Start me Talkin’ – A Sonny Boy Williamson song. As always Rory was able to take a song by someone else an work his Rory magic on it, lighter or heavier strings, different guitar, different key, something to make anyone else’s song sound a bit different, and by doing that he nails them to the floor, often the walls and ceiling as well. There is some excellent harp playing from Mark Feltham in this song, not that Mark doesn’t play brilliantly every time but sometimes its just more brilliant – to me that is.

Track 10 – Seven Days – this is another gutsy blues number, an acoustic song, Lou Martin (R.I.P) played keyboards on this and again there is some excellent harp work from Mark Feltham. A man on the run from his past, feeling like he has experienced seven days of thunder and eight days of rain, like a ball and chain, plans to trade in his razor for a .44 and go knocking door to door till he finds who he is looking for, he will be locked up for sure this time and then face the electric chair. He needs to keep one step ahead of everyone or they might track him down.

Track 11 – Seems To Me – Blues, hold me back, I’m just going to die a happy woman. Drums and Bass working in perfect harmony to provide the solid backing, what is called a “Strolling Blues” tempo. I’d have my shoes off to dance to this; it’s an amazing track. One I am very very fond of.

Track 12 – No Peace For The Wicked – this is hard blues, gritty and gutsy. The lyrics say someone has come looking for sanctuary I guess, he isn’t buying because he has been stitched up/done over by this person and now they turn to him for help, nobody else will help, friends in high or low places won’t help – this person is on their own.

I love everything Rory wrote, played or sang, some songs I like more than others, some make my “love them” list, but I haven’t heard anything I didn’t like, he was so inventive, never samey, never blah blah like some artists are.

I do feel that Defender and Fresh Evidence had “darker” lyrics, than his earlier songs.