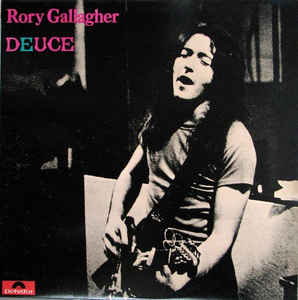 Track 1 – Used To Be, the beat is real punchy, Rory’s lyrics as always make me think, lots of other peoples songs are kind of blah, blah, blah, but Rory wrote what he was feeling, from the heart, I’m not 100% certain these lyrics relate to a female he was involved with, they are a bit ambiguous in that way, Rory again keeping the listener on their toes, the only lines, to me, that say it may be a real person are “Baby I remember a time when you really used to try, nowadays baby you can’t even look me in the eye”.

New Notes: After being immersed in Taste for 6 months of 2015, I think this relates to the break up of Rory’s baby “Taste”, whereas on his first solo album the songs I believe relate to Taste and not a romance, they are more broken hearted lyrics, this one is mad, I’ve moved on, you will see me but don’t come looking for me, I’m done with you.
As I have said before and no doubt will say again quite a few times during my postings, there was a lot more to Rory than people realised, even people close to him, I think he played his cards really close to his chest, he didn’t let people in very much, if they don’t get in then they can’t wound you (myself – been there, done that and got the T shirt). Its a great song, there is only one song he wrote that, to me, seems out of place, a bit to one side, when I get to that in my postings you will know.

Track 2 – I’m Not Awake Yet, I so love this track, its upbeat in tempo, some fabulous acoustic fingerwork from the great man, the lyrics are just mind blowing. She is coming back, he is looking forward to seeing her, he won’t be late and they can be together. Its a really “good feeling” song, this is the vibe I get from the music and lyrics and from Rory, he wrote what he felt, some lyrics are from the heart, some from the soul and for me personally the most painful are from his heart and soul together.

Track 3 – Don’t Know Where I’m Going. The tune is upbeat, happy but some of the lyrics say otherwise. I’ve read much about Rory’s melancholy feelings, and the lyrics show this – Broken hearted but you won’t see a trace, Feeling disconnected, these blues are out to kill; These say to me that he was “down” when he wrote them, however blue he was this didn’t get in the way of his song writing which was quite prolific – the lyrics also say I got sand here in my pockets from the place that I come from, that’s where I’m going so I’ll say so long.
Sand/the sea meant a great deal to Rory, a Pisces, water sign, there are references in a few songs to the sea, which from my readings of as many articles as I can read say he got inspiration for songs from the sea.
New notes. Taste again, he was going to have to dig deep and get back to his roots to find out where he was going musically. Taste would have gone up and up, right to the top I believe, so a regroup was necessary, take stock, move on.

Track 4 – Maybe I Will. This is a really lovely song, I get the feeling of running at the start, just like running through a pool of rain, the tempo stays the same for the second verse then goes quieter, like sitting down reflecting, again Rory’s love of mystical things by reading the leaves in his cup before he puts it away. The tempo picks up again to the running, but its not fast running, you don’t notice anything if you run fast, not able to see the field of grain or the pools of rain – not puddles but pools. Water again, the Pisces and water. The lyrics are very upbeat and cheery, a happy good feeling song. I hadn’t really noticed this one before, sounds bad given how much Rory I listen to, but it is a really lovely song.

Track 5 – Whole Lot of People. I’ve had a struggle with this, it has great significance for Rory, the lyrics are relating, I believe, to a life changing event in Rory’s musical/working life, things are going to change eventually, the tune is again punchy with lots of twists, but it’s a hard one to for me to diagnose, I believe it may relate to the demise of Taste and Rory’s feelings on that, they were a good band but got “stitched up” and for self preservation had to be disbanded, I like the song very much but it is a hard one to decipher the meaning.
New notes: I wrote originally in 2014 that I thought this related to the break up of Taste and I’m more convinced than ever that it does. Rory poured his heart and soul into his lyrics, what he couldn’t or wouldn’t say outloud, he put to music.

Track 6 – In Your Town, A great driving beat from Gerry on Bass and the late Wilgar Campbell on drums to perfectly compliment Rory’s lead, his lyrics seem to be about someone out of prison at the end of their time who wants to “have it out” verbally with the people who put him in prison, to me it says some people tried to screw him over but he won’t roll over and play dead, still standing despite what they tried to do to him, doesn’t want any trouble but is saying “you put me down but hey, I’m back again”, Rory was a master at hiding things in plain sight, it’s a great song

Track 7 – Should’ve Learned My Lesson. Real gutsy and bluesy, seductive and sexy. The lyrics say she has “done the dirty” on him, he should have taken his friend’s advice but didn’t, and realises his first mistake was in thinking she would be true. The lyrics are “heart painful” to listen to, for those of us who have had their heart broken, they understand and can empathise. It’s a beautiful track, again one of Rory’s quiet but powerful songs.
New notes: This could also relate to Taste, the band had commitments to fulfil and as Rory had decided on the way to the IOW Festival in 1970 to break up Taste, this couldn’t be a clean break after IOW, they still had 4 months of obligations to carry out.

Track 8 – There’s A Light. The music is jazzy and bluesy, some parts are almost what I would say “floaty”, like things floating round in the air, the lyrics are of the light that shines on him since she appeared, (ever since you came to me). There’s a strong psychic connection between them, words don’t need to be spoken to each other, they sense each other without words. As I have read often that Rory always had his antennae “on”, used telepathy within his band and they all knew what he wanted from them without having to say. It’s a wonderful gift to be psychic. I think this is an under-rated song, Rory was a wonderful lyricist and poet as his songs are often poetic, mostly the quieter, reflective songs. This song is a personal favourite of mine.

Track 9, Out Of My Mind. An acoustic number, Rory could literally turn his hand to anything, the lyrics say to me that although he is “here” in body his mind is elsewhere “I’m only over here”, again another psychic connection with “her” she appears just when he needs her, found him staring at the stars, she lights up the darkest night. Its a beautiful track with beautiful poetical lyrics, I’ve said it before and will say it probably a few more times while writing these posts, Rory wrote from the heart, what he was feeling went down on paper and then to music and song. I am dazzled by his talent and in awe of the man himself. I never met him but miss him a lot.

Track 10, Crest of a Wave. It says to me that someone has outstayed their welcome, smiling but are they really happy? Kind of obvious that this person/s isn’t wanted or needed, “you can see by the way that they are talking, its time for you to pick up your grip and start walking” then basically says keep going, don’t turn round and don’t come back. I gather someone really did a good job of back stabbing and the lyrics say “get lost”, the person or persons won’t quit or give in but they will get the message that the door has been closed on them and it won’t re-open for any reason – “but you’re gonna fail, sometimes you just don’t understand”

The lyrics have no romance in them but the message is very clear.

New notes: I think this relates to Taste as well. I have read that the other band members went their own way rather than stick with Rory. He was saying “are you sure you are happy because you don’t look happy to me”, but he was done with them.

I also believe the disbanding/breaking up of Taste was very painful to Rory and this pain stayed with him for the rest of his life. Donal has said the legal stuff relating to getting Rory’s songs “back” getting the legal permission for him to perform them dragged on and on for the rest of Rory’s life and as we know it took till 2015, 20 years after Rory passed on, to get the Isle of Wight DVD and the Taste Box set out for the fans.

All through the rest of Rory’s musical career there were little riffs popped into songs, the Taste fans would recognise them instantly, but there were only a few notes, shows that Taste was always in his mind and he would allow little snippets to come out for an airing now and again. I listen to his songs constantly and now I notice a handful of notes, I get pulled up sharp and I often say outloud “oh, what’s that one from”

I am reading all the lyrics as well as listening to the songs, I feel I gain more insight than just listening.