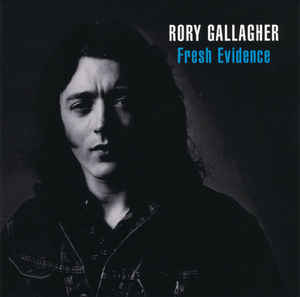 Review of Fresh Evidence – Released on 1st May 1990

Track 1 – Kid Gloves – About a boxer who won’t compromise but is being steered towards a corner due to circumstances, he hates himself for allowing the mob to “buy” him “I’m back on the mob’s payroll” they can buy his body but not his soul. They expect him to dance to their tune and do as they want, even having a man in the front row with a gun should he not do what the mob want. It has a really edgy beat to it, fabulous to dance to (me the dancer again) – all Rory’s songs have a beat to dance to, without that songs become blah blah and go in one ear and out of the other, this NEVER happens with Rory, his music and lyrics hit me like a bullet from a gun. Awesome.

Track 2 – The King of Zydeco (to Clifton Chenier). I’d never heard of Clifton Chenier or the kind of music he played. I now have 3 albums by him and I had also never heard blues played on an accordion. Rory was a massive admirer and fan of Cajun music and Clifton “the King of Zydeco” Chenier. This is an amazing track, I can imagine the crickets on the bayou, feel the heat from the swampy ground, Rory really nailed the sounds on this one, Geraint Watkins on accordion as well.

Track 3 – Middle Name – all the way through this song is Gerry McAvoy’s driving bass, it doesn’t dominate the song but for me it gives it the added edge needed to make this song awesome. The lyrics say to me that she has gone – “Still can’t find you, what can I do?”

Track 4 – Alexis – a deep blues instrumental in homage to the Godfather of British Blues, Alexis Korner. Rory didn’t do many total instrumental numbers but the ones he did are just mind blowingly brilliant. The sleeve notes say this was a new challenge for Rory but in my mind, he stepped up to the front, grabbed this challenge with both hands and nailed it 100%. I wish he had made an instrumental album, just completely instrumental – it would have been A M A Z I N G.

Track 5 – Empire State Express – An Eddie ‘Son’ House song. I’ve heard Eddie’s version and Rory’s is different. Rory was a genius at taking someone else’s song and working some magic on it, different key, lighter or heavier strings, slightly different instrument, something, which made it uniquely Rory.

Track 6 – Ghost Blues – It’s a gorgeous track, but the lyrics are so so sad. A really gorgeous Celtic intro, just stunning, takes my breath away. “My blood burns just like toast” – WOW that line is inspired, like skate on razor blades. From lots of articles I have read I think this was a semi autobiographical song, Rory is reported in the articles as drinking a lot before starting on this album. He did stop but I get the feeling the lyrics relate to that time. It has a really strong drum line from Brendan O’Neill, Gerry McAvoy on bass, solid as always holding the back door.

Track 7 – Heaven’s Gate – This is one of my favourite tracks off this album, Brendan O’Neill on drums and Gerry McAvoy on bass providing the solid backing to this number to allow Rory to flow like a river, pulling heartbreakingly painful notes from deep inside. Mark Feltham on harmonica just adding to the amazingly beautiful music.

Track 8 – The Loop – the second instrumental on this album; this concerns the public transport system in Chicago, which is called The Loop. It’s a bluesy number but it’s full of fun, it’s not possible to feel unhappy when I listen to this.

Track 9 – Walkin’ Wounded – “I’m walkin’ wounded, got my heart in a sling” I plan to have those 2 lines tattoo’d on me. This is a song full of heartbreak and pain; the lyrics are Rory baring his soul again through his music. “You’ve done your damage, are you sure that you’re through? Don’t cross me no more, I’ve had enough of you” John Earle and Ray Bevis on Saxophone, Dick Hansen on Trumpet.

Track 10 – Slumming Angel – A girl in the wrong place, come from the “rich side of town” for a look about but she is where she shouldn’t be, “take off those rose-coloured glasses, this is no wonderland”, she has been noticed and the song ends “Slumming Angel, let me show you around”. The music has a few twists and turns that the listener isn’t expecting. Typical of Rory to take you on a journey you didn’t expect to take but it’s a good journey to go on.

Track 11 – Never Asked You For Nothin’ – Cajun blues and accordion again with Geraint Watkins. This takes the listener again on a journey they were not expecting to take. Some girl has “done the dirty” on him and now he is in prison “cell block number three”, he can’t work out why she did this when he has never asked her for a thing. The lyrics are really thought provoking, telling a story. Brilliant. Mark Feltham plays beautiful harmonica to go alongside the guitars.

Track 12 – Bowed Not Broken – Rory writing about someone less fortunate, someone down on their luck but not broken, still fighting, won’t give in no matter what. Musically it’s wonderful, tiny bit challenging for me as someone who loves to dance, but I wouldn’t be foxed for long. It’s a beautiful song again telling a story.