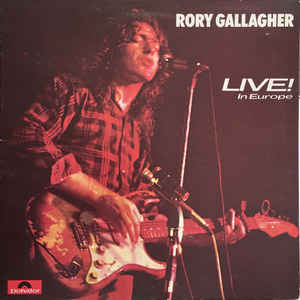 Track 1 – Messin’ With The Kid. Written by Mel London according to the sleeve notes. Rory nails this 100%, its a foot stomping, roof raising, punch you in the jaw rocking beat, Rory as always giving everything he had, Gerry McAvoy solid and dependable on bass and the late Wilgar Campbell bringing up the rear on drums. A tight tight band who I am sad that I never got to see.

This is the first album I bought back in 2012, Easter weekend, HMV in Edinburgh, had the choice of this or Tattoo, I went for the live CD and didn’t get to play it until the Tuesday after Easter as I flew to Glasgow for the weekend. I took a leap of faith as I had no knowledge of Rory before this. By 1/3 of the way through this track I was hooked, 110% Roryfied. Since then I have bought every album I could afford, 41 so far, studio and live, 11 by Taste plus DVD’s and 20 of the 23 albums Rory guested on. Rory is totally awesome.

Track 2, Laundromat first appeared on Rory Gallagher – his first solo album, this is a live version, Rory giving every ounce of energy he possessed when he performed live, I can feel the blood and sweat in every note – so sad I never saw him perform, he must have been a fireball on stage, Laundromat is an amazing song, about a subject pretty ordinary but in Rory’s hands becomes extraordinary

Track 3 – I Could’ve Had Religion, a brilliant gutsy blues number from Rory, he did everything so well whether electric or acoustic – his little girl wouldn’t let him pray, another twist on the blues from the multi talented Rory, the blues being either about love, lost love, cheating, killing the one who has done you wrong or religion, it’s a brilliant track, done to perfection by Rory, I love it.

Track 4 – Pistol Slapper Blues by Blind boy Fuller. Rory’s first ‘Live” album after Taste.
Not a song written by him but he managed to put the Rory twist on it and made it his own, not in a bad way, it’s just different to the original and I love it. Acoustic, which he was equally at home with along with electric. It’s just a real amazing song, Rory’s fingerwork on the strings is awesome, its a song I really love a lot.

Track 5 – Going To My Hometown, Rory starts out like he is wound up like a tight spring, lets a bit out and then launches into the song, squeezing every ounce of life out of the mandolin, its got a complete foot stomping beat, this is for me very serious dance music, shoes off in the corner and giving it 200% in response to Rory’s serious energetic playing. It’s an absolute stunner of a number, if you don’t get into the spirit of it then you must be dead. I play this in the car and sing along as if my life depends on it, can’t have the man singing alone can I?

Track 6 – In Your Town. Over 10 minutes according to the You Tube video. Rory “LIVE” – he had the audience in the palm of his hand and kept them there, his fingers flying like lightning up and down the strat, taking the listener here, there and back again all the way through the song, virtually stopping at one point before launching back into the brilliantly relentless beat of this song. It makes no difference how many times I hear this song it knocks me dead, Rory takes the listener (in this case me) on a journey of musical excellence. I’m totally in awe of his talent – did I say I LOVE THIS SONG, well I do.

Track 7 – What In The World, a Willie Dixon number, so gutsy and bluesy, I adore gritty, gutsy, seductive, sexy blues, and Rory just nails this, really nails it to the floor, walls and ceiling, throwing in some amazing harmonica playing as well, some people may think he is just a blues/rock tornado but there was much more to him than that, this track shows where his musical heart really lay, the blues has to be felt deep inside and when it grabs you then you just hold on tight for the ride of your life!

Track 8 – A Sonny Boy Williamson track, Hoodoo Man – again another gutsy blues number that Rory loved and played so well, this has everything, quiet parts, seductive parts and bucketloads of Rory awesomeness backed up solidly by Gerry McAvoy on bass and the late Wilgar Campbell on drums, it’s a powerful song and Rory as always nails it to the floor and anything else that is loitering about.

Track 9 – Bullfrog Blues – just a 200% ball of lightning, Rory blasts in at a hundred miles an hour and if you are not moved to dance like your life depends on it then you either don’t have the blues or you are dead, I find it impossible not to dance – when Gerry, Ted and Marcel played this – barefoot, it’s just an amazing song and “live” it is like a nuclear explosion! Love it so much. Well did you eva!!!!

Not much really of a “new” review, but I revisited everything I wrote the first time and just added extra bits.