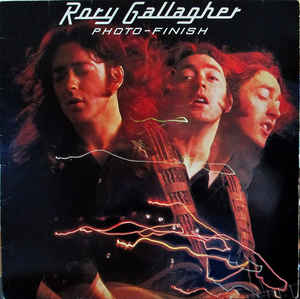 Track 1 – Shin Kicker – Comes at you like a bullet out of a gun, Ted McKenna’s pounding drums providing the beat along with Gerry McAvoy’s bass leaving Rory free to be Rory. All working together to blast out this awesome track. It has to be played LOUD for maximum enjoyment, this is no shrinking violet. I only got two speeds and it’s slow and fast.

Track 2 – Brute, Force & Ignorance – Concerns a band who hit a small town for a one night stand, they blow the place apart and end up being escorted out of town. Even the mayor wants to see them but it’s not his night to go out. It’s another amazing Rory track that just blows you out of the water, has to be played LOUD for maximum pleasure, Ted McKenna pounding the life out of his drums (awesome) and Gerry McAvoy as always solid on bass. It’s got a seductive beat to it.

Track 3 – Cruise On Out – This track is a personal favourite of mine, the pace is constant, Rory, Gerry and Ted are tighter than a straight jacket, the beat for me is off any scale you care to mention. “The boys in the band will play all night, if they would have their way” “In this full scale commotion, the pace will never drop, you’d better retire gracefully if you’re too pooped to pop”, well I’m never too pooped to pop, I can dance all night and this song is just the business. Band of Friends played this at The Great British R&B Festival in Colne in August 2014, I was very very happy, had my shoes off and danced like my life depended on it!

Track 4 – Cloak & Dagger – A slower paced song, swampy it says on the sleeve notes, yes, that’s a good way to describe it. Its not blues and not jazz. This concerns the “Moll” either a gangsters moll or the hardboiled private eye’s moll – silent danger in her style. Rory was a big fan of Dashiell Hammett and Patricia Highsmith along with other writers of detective novels, so this is where “she” came from. Rory plays harmonica in this song.

Track 5 – Overnight Bag – a direct contrast to Livin’ Like A Trucker from Tattoo. This says to me that life on the road was becoming tiring, always on the move, hardly ever sleeping in the same bed 2 nights in a row, he has little to carry, toothbrush and guitar and his overnight bag, he also packs his sorrows in an overnight bag. Constant travelling and touring must have been lonely, even though thousands of people wanted to see Rory and his band, it’s still easy to be lonely even in a crowd of people. I love the song very much but the lyrics are sad.

Track 6 – Shadow Play – written, according to an interview Rory gave, while he was ill in bed with flu!! Wanting something to do while he was not well, he wrote this! The lyrics are inspired – stars colliding, shadows running in full flight to run, seek and hide, lights blazing away, he feels strange in side a bit of Jekyll and a little Mr. Hyde. Rory paints a visual and audible picture of the night and wondering where he fits in the Shadow Play. I love the song, studio its brilliant, live, Oh my stars, its cosmic!

Track 7 – The Mississippi Sheiks – The tempo for this song is just sublime, Rory talking about older blues musicians who played in the south. Was it just a dream that he saw the Mississippi Sheiks or maybe he had been travelling in a time machine. You’ve never lived at all till you’ve done that Georgia crawl. It’s a beautiful song. Nothing Rory did was ever easy and by that I mean there was always more to any song, any lyrics than just listening to the song, I’ve said before that some artists songs are blah, blah, blah and that’s ok sometimes but Rory never did that, he was constantly inventing new little twists, often very subtle twists but they are what make you sit up straight or stop you in your tracks and say “woah” or “what was that”. Genius.

Track 8 – The Last Of The Independents – this is another song that I could say is either like a runaway train or you get grabbed by the hand and just pulled along, fast tempo, like someone on the run, having to keep one jump ahead of the chaser. Ted McKenna again pounding the life out of his drums (awesome by the way), Gerry McAvoy solid on bass, both of them holding the back door shut and Rory just being Rory and doing what he did best. The lyrics tell a little story about someone who knows where the loot was buried 11 years ago and everyone wants to know where it is. The sleeve notes say he wrote this after reading a review of the movie Charlie Varrick with Walter Matthau and Andy Robinson – they stole money from the mob and had to keep one step ahead to stay alive. I’ve seen the movie, its pretty violent but a great storyline. The end of this track has sirens wailing indicating a chase. Rory was a total independent, never let the music business get one over on him, always his own man, did things his way.

Track 9 – Fuel To The Fire – Oh, what can I say about this. Its stunningly beautiful, Rory bearing his heart and soul in his lyrics, talks about his soul being on fire, it’s heartbreakingly beautiful, so sad, like a Million Miles Away sad and Wheels Within Wheels sad. One of my favourite tracks. Nearly all the songs I love just a bit more than all his songs are the sad ones, the soulful ones.

Track 10 – Early Warning – Another fast paced song, and about a subject that occupied much time in the press in 1978, the threat of nuclear war. This had been on-going for longer than just ’78. Rory could write a song on just about any subject, he didn’t get political but this was a subject that concerned everyone. The lyrics are very clever – “Ain’t no pity for my city, well let me at you, no I’ve got to run” “See no tomorrow time to borrow, now I’m waiting for the nuclear nurse” – really clever lyrics. There are very few songwriters who would be brave enough to put pen to paper much less actually record a song like this. Its inspired.

Track 11 – Juke Box Annie – Ted McKenna starts off with what sounds like cow bells being tapped with drum sticks (sorry they probably have some proper name for them but I’m no expert), Rory plays harmonica, it’s a honky tonk tempo, he is in love with Juke Box Annie but she listens to everybody telling their stories, he can’t get any credit from her but she charms him to bits and makes time stand still. He is trying his best to “chat her up” but she isn’t buying, but he keeps trying anyway, he thinks about her all the time. Annie is the best barmaid in the world. This is a fun song, it sounds like they had a lot of fun recording it, it’s a feel good song.