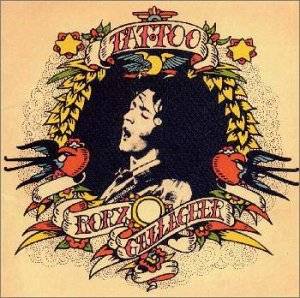 Track 1, Tattoo’d Lady. Rory had a love of funfairs, probably circus’s too, tattoo parlours, although to my knowledge he didn’t have one himself, apart from being self evident in the title, the song and lyrics relate to a nomadic lifestyle, like a wandering minstrel, a troubadour, going from town to town, country to country entertaining people. Its a real fun song, someone surrounded by people they love and trust, the family, never let you down, always have your back. I really like this song.

Track 2, Cradle Rock. This hits you right between the eyes like a bullet from a gun, the pace never lets up, if you dance its not for the faint hearted, the pressure is on from the 1st note. The lyrics are amazing, comparing himself to many things and how she wouldn’t let things happen to him BUT if she was true to him she would listen when he talked! I love this song, Rory doing this live must have been cosmic, out of this world. I’ve heard Band of Friends play it and it’s awesome.

New Notes: its not possible for me to sit down to this, I think Rory would be most unhappy if I wasn’t up dancing to this!

Track 3 20:20 Vision. It’s a fun song, all about a girl who makes him and everyone else happy, she can make his grandpa not only feel like he is 6 years old but also get out of his wheelchair. It sounds as if a lot of fun was had recording it as at one point Rory laughs while singing. I really like this song a lot, I get the vibe that everyone was having a really good time in the studio and they were all in a “good place” while doing it. Its really upbeat and fun.

Track 4 – They Don’t Make Them Like You Anymore, I get the impression this is a girl/woman that Rory is very smitten with, she is his “dream” he has been standing close to her, but hasn’t made a move, she might run from him and he hopes she will see he just wants to be near her, I really love this song so much, I have made a “my funeral CD” and this is the penultimate track. Lyrically it’s perfect, just perfect.

Track 5, Livin’ Like A Trucker. The lyrics speak of constant travelling, constant touring, always on the move – livin’ like a gypsy, travellin’ man, it’s full of “yet to do” – I’ve seen some places, but more I ain’t seen yet – in contrast later with Overnight Bag which sounds like the constant touring and travelling is starting to become tiring, but that’s a few years down the line. This also says to me that he would have maybe liked a companion – tell your mama not to worry baby, get on up here, to take the journey too, also given a choice he wouldn’t change a thing but would do it all again.

New Notes: The life of a travelling minstrel/troubadour going from town to town, city to city, always moving, no permanent fixed roots for this kind of lifestyle. It’s a very upbeat song.

Track 6, Sleep On A Clothes-Line. I’m a little unsure if this relates to a real woman or a “dream” woman, he has been looking for her all night, the lyrics speak of all the things he would do for her to prove his devotion and love, all these things he would do just to hear her say “I Love You”. Its very heart stripped, baring his soul lyrics. Rory always felt things very deeply and wrote from his heart and soul, not just words but real emotion in these lyrics. Its got a nice driving beat. I love this song.

Track 7, Who’s That Coming. I feel that this concerns an “ideal” woman, Rory’s ideal woman, she would know what he was thinking even before he did, “She’s always had just what it took, to read me like I was an open book”, someone so in tune with him that they might not speak to each other much but communicate by telepathy, so together, so one, that words would not be needed very much between them. I’ve read that Rory’s antennae were always “on” and he used telepathy/ESP a lot with the band. This “she” is not called darlin’ or baby, but just she. It’s a beautifully upbeat song, I like it a whole lot.

Track 8, A Million Miles Away. Its a brilliant track, lyrically and musically, Rory with the blues in a room full of people talking, having a good time, but he is sitting on the edge of this, not feeling quite the ticket. I read that he and Donal had been walking close to the sea, on the cliff path and Rory vanished, Donal walked about for a while then really started to panic, suppose Rory had fallen and broken his leg or something, suppose he had fallen in the sea, he said it was a stressful period, then kind of at the last look about before he went for help, he spotted him sitting staring at the sea. Rory said he had the inspiration to write a song, A Million Miles Away it became and just needed to get it down on paper, so he just vanished to get it written. Gave poor Donal a heart attack almost.
Rory got a lot of inspiration from the sea/water, being a Pisces, a water sign, and water/sea/flowing figures a lot in his lyrics in a number of songs.

It quickly became a “must play” at gigs as everyone liked it and I imagine the fans would demand it as they loved it so much. I find it rather sad, Rory all alone staring out at the sea, he was too nice a person to be alone.

Track 9, Admit It. This is really specific, calls her baby – Admit it, baby. The difference between Who’s That Coming when the woman was called She and I understood this to mean an “ideal or dream woman” and this song, this is so definite, this one has really driven him nuts, she has gone and broken her word, he is mad with her, really mad, wants her to “walk right out of his mind”, not out of his life but out of his mind, this is really permanent.
But, if they hadn’t met before and met now, he guesses he would fall, again, he is a fool for her and can’t say no to her.

Rory wrote his lyrics from the heart and often from his soul, all the words had deep meaning for him even when he wrote about trains or travelling or anything else.

The song starts with Rod’s drumming, Gerry comes in on bass followed by Rory, Lou is quietly bringing up the rear, no-one is left behind, they all get a chance to “do their own thing” during this song as during all of the songs. They are a tight tight unit. I love this song.

New Notes: Rory never overshadowed the other band members, he could happily take a back seat and let each of the guys shine, no jealousy, no “its my band and I’m the leader” from Rory, as a human being this is why is he so loved by other musicians, fans, anyone and everyone who met him.

Track 10, Tuscon Arizona. This is the last track on my CD but I have seen there could be another track on a different album. Mine only goes up to 10. This is a Link Wray song, given the Rory treatment. I’ve listened to the version by Link and its more acoustic, has a longer intro and sounds more country than Rory’s version and Link’s also has a Hawaiian sound to it.

Rory uses a lap steel guitar which gives the song a deeper sound and I much prefer Rory’s version. He must have been able to hear the potential in Links song in order to record it himself, to be honest I thought Link’s version was a bit bland. Rory’s version, in my humble opinion is a whole lot better. Kind of understated almost, it’s not a song I will forget, its really nice, I get a warm fuzzy glow.

New Notes: Rory could take a song by anyone else and give it the Rory treatment, he never overshadowed the original, always always told his audience it was a “this person” song, he had the ability to give the song a new life, the same but different. Unique.