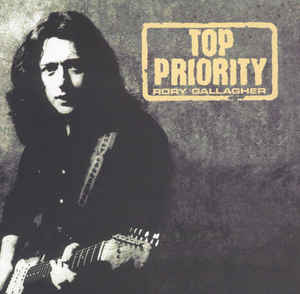 Track 1 – Follow Me – Quickly became a standard “must play” at live gigs. The lyrics don’t refer to anyone specific – no baby or darlin’ just you, “won’t you follow me where I’m bound, time’s for borrowing now, won’t you follow me, time is tight, before things swallow me down” “It’s time to depart, go with your heart” its an open invitation to follow him to the ladder into space and leave without trace before things swallow him down. It’s kind of mystical, spiritual even. I really love the song; Rory was so very clever with his lyrics.

Track 2 – Philby – Rory on the Coral electric Sitar, this gives the song a mystical Eastern feel, the lyrics I feel have a double meaning, Philby, the spy, can’t come in from the cold, but the travelling singer/minstrel/troubadour – Rory – Lost in transit in a lonesome city, his eyes never seem to close, morning comes and he must be moving on again, all night long his mind’s been burning, makes him feel a long long way from home. The lyrics are inspired; Rory was a master of taking something and making it extraordinary. Using the Coral on this was a stroke of genius.

Track 3 – Wayward Child – A wild child, may have referred to someone Rory or any of the guys knew along their travels, someone who does her own thing, plays with fire and knives, lives a bit close to the edge and seems to enjoy doing that. “You always were a problem, never meek and mild, life is just a street fight, you know you’re the wayward child”.

Track 4 – Keychain – Rory wants to lock up all his troubles and leave them behind, he is going someplace that will be hard to follow, he wants to get away and not be followed at all, not giving his number or a forwarding address, he is out of here, train or plane but he is gone, until things get better he is gone. He is as mad as he can get, playing Russian roulette. It’s a stunning blues number, not as bluesy as Off The Handle but pretty close.

Track 5 – At The Depot – Fast paced tempo, I was going to say typical but then I corrected myself, Rory was never typical and that would have been insulting for me to say that. I’m gathering from the lyrics that Rory was getting itchy feet again, wanted to be off playing live, “feeling kind of sloppy, waiting for a call” “Running out of patience, running out of cool”, it definitely says to me that he wasn’t happy “chilling” but needed to be busy all the time and he was at his best in front of an audience. As always Gerry McAvoy provides the solid bass so necessary to any song and Ted McKenna is driving the drums like a juggernaut – an awesome song.

Track 6 – Bad Penny – Rory’s lyrics speak of a woman who meant something to him but now she is history, but she is trying to pick up where she left off, the bad penny has turned up again, trying to fit into the picture, she did the dirty on him and he broke like a shell, but he is on the mend now and is not about to let it happen again. The Coral electric Sitar is used again on this track.

Track 7 – Just Hit Town – According to the sleeve notes, it was about this time that Rory’s fear of flying was getting worse, after a horrific flight to Norway seemed to be the catalyst for this. Rory was touring more and more, this required more flying and his lyrics say that whatever happens he has no plans to change his ways, there is even (to me) a reference to the tablets he was given to cope with the anxiety of flying – “Well I can’t slow down, got to take some more of these, more of these” “I’m flying all over the land and it ain’t no use to change the way I am”. This also says (to me) that Rory would do whatever it took to keep on travelling and touring, nothing would stop him and if he had to take help for this then he would. It has a pounding driving beat from Gerry, Ted and Rory.

Track 8 – Off The Handle – Really gutsy seductive blues, just the way I like my blues to be. Rory’s lyrics speak of being at home alone, well just him and a cat who prowls round the house all day not doing what cats should do, “It’s one of those nights when you know you’re alone, feeling half crazy, just body and soul”. Rory also plays harmonica on this track. It’s a song I never get tired of listening to, Band of Friends play this and it’s awesome.

Track 9 – Public Enemy No. 1 – This she looks like a gangsters moll but she drives the getaway car, whatever they are doing tonight, she must keep the motor running, keep one step ahead of the law as they will go down if they get caught this time. Rory was a big fan of American gangster films, all those old black and white brilliant movies of the 1940’s and 1950’s; this song is a nod to them. I’m a fan of them myself, James Cagney, George Raft, Edward G. Robinson, Bogie – they don’t make them like that anymore.

Track 10 – Hell Cat – I love this track, Rory plays a bit spooky, again another twist to keep the listener on their toes, he has a hellcat on his trail, he can hear it wail, seeing things out of the corner of his eye, he knows there is something there but when he looks he can’t see it, but he knows its there “a shadow in the doorway, freeze where you stand” “it’s the darkest feeling this side of hell”. Rory was a superstitious man, his antennae were always “on” and he was in-tune with this side of his world.

Track 11 – The Watcher – The base for this is Ted McKenna’s pounding driving drum beat followed by Gerry McAvoy’s steady bass, these provide the foundation to allow Rory to put the icing on the cake.
I love to dance, and preferably barefoot, I have always said the music speaks to me and normally by the second or third note I know which instrument is speaking the loudest, in this case it’s the drums and I follow the drumbeat to dance to. Everything else is necessary but incidental (for me) to the driving drum beat.